Located 365 steps about the city, Swayambhunath is a Buddhist and Hindu temple that is among the oldest religious sites in Nepal, possibly founded at the beginning of the 5th century CE.

Mythically, the entire Kathmandu Valley was once filled with water. In the center grew a lotus. A holy man named Manjusri had a vision and traveled to the lotus. Seeing that the valley would be good for human settlement, he cut a gorge at Chovar and drained the lake. The lotus was transformed into the hill on which Swayambhunath sits and the flower became the Swayambhunath stupa (a stupa is a rounded structure containing Buddhist relics; the white in the image below is a stupa).

The stupa has Buddha Eyes, or Wisdom Eyes, painted on it. They symbolize the omniscience of Buddha. The curly “nose” is the Nepali character for “1” representing uthe unity of all things as well as the path to enlightenment. The dot represents the third eye, another indicator of wisdom.

The same holy man who drained the lake let his hair grow long, and he developed head lice, which were then transformed into the monkeys that still live at the temple.

END_OF_DOCUMENT_TOKEN_TO_BE_REPLACED

I was done having fun. Fun time was over.

Let me explain. We’d booked a full-day trip out of Chiang Mai. It began at 8 in the morning, when the van picked us up from the hotel.

We first went to see some elephants.

END_OF_DOCUMENT_TOKEN_TO_BE_REPLACED

I’m sorry for the radio silence. My Dad and my uncle Doug came to visit for two weeeks, and we did so much that my blogging couldn’t possibly keep up. So here’s a round up of what we did, in no particular order.

END_OF_DOCUMENT_TOKEN_TO_BE_REPLACED

Bandipur is a little town halfway between Pokhara and Kathmandu. You have to tell the bus driver you want to get off at Dumre, and then you catch the local bus (takes 15 minutes, costs 50 cents) up to Bandipur.

END_OF_DOCUMENT_TOKEN_TO_BE_REPLACED

I was initially underwhelmed by Nepali food, which pretty much consists of two foods: momos and dal bhat. Momos are steamed dumplings stuffed with vegetables, pork, chicken or buffalo. I later found out that momos are actually appropriated from Tibetan cuisine.

A very blurry photo of a Nepali dal bhat thali

END_OF_DOCUMENT_TOKEN_TO_BE_REPLACED

Angkor Wat: Temples and the Jungle at Dawn

My tuk-tuk driver picked me up at the hotel at 5 a.m. Sunrise would be at 6 a.m.

We drove through Sieam Reap, joining a steady, silent stream of tuk-tuks. Then we drove through the jungle, dark and mysterious on each side. Occasionally the headlights revealed twisted vines in monstrous shapes; I dreamed of snakes, snakes everywhere, the following night. Mostly, though, I was surrounded by the smell of the jungle: earthy and green, but also surprisingly sweet. END_OF_DOCUMENT_TOKEN_TO_BE_REPLACED

The Worst Is Over: Crossing the Cambodian Border

Crossing the Cambodian border is legendary for its difficulty and general unpleasantness.  Scams are plentiful, officials are corrupt, and actual guidance hard to find.

The games started on the bus, before we’d even reach the border. The bus pulled over and one of the bus operators handed out “official” Cambodian forms. “For visa,” he said. “For quick processing.” The form was filled with typos and so badly photocopied that the government seal was not legible. Although that may have been on purpose.

According to him, it will be a mere $33 for “quick processing.” This is a scam. You can’t get your Cambodian visa until you are in Cambodia. That money will go in his pocket.

It’s okay, I’ve prepared for this. This is like my Olympics. I’ve been training. I will not be taken in.

I raise my hand and oh so politely but oh so loudly ask what the $33 is for. Do we still have to walk across the border? What’s quicker about that?

He won’t meet my eyes. It’s okay, though, I’ve clearly made some allies. Other backpackers look at me and nod. We’re serious. We’ve read up on this. Not going to be fooled.

Now we have to get out of the bus and walk. It will meet us on the other side, we hope.

The Cambodian border is a scammer’s dream: there are three or four separate buildings, spread out over about a quarter mile. None of the buildings are visible to each other, and official signage is bad or missing. This gives the touts and scammers lots of opportunity to swarm you and try to point you “This way, miss. Miss, lady, this way. Quick processing.” Eyes ahead. Show no hesitation. Reveal no fear.

At this point about twelve of us have banded together. We’ll get through this.

We make it through three buildings, collecting various stamps and whatnot. We hear one tourist complaining that she paid $60 on her bus for her visa, why does she have to pay more? We shake our heads. Should have read the blogs.

We bob and weave around the touts and scammers, keeping our eyes ahead.

The third building is where the challenge is: these officlas say the visa is $30 (true, true, according to what we’ve read) but there is a 1,000 baht processing fee. Oh no. Not true. Generally speaking, when an official asks for payment in two currencies, one of those is going into his pocket. 1,000 baht is about $3. I pay it. Do I regret this?

The American couple behind me, however, refuses to pay it. They claim to only have $30. Good for them. Stick it to the man. The rest of us gather to wait for them.

One of the officials makes a shooing motion at us. “Go next building!” “No, no, waiting for our friends!” We say, with big smiles, pointing to the American couple. They have backup. We’re here for them. They are bolder than we, but we won’t desert them in their time of need.

The official is a little flummoxed but recovers. “Oh, you wait long time! Looong time!” We smile back at him.

The American couple must be made to wait for the sin of not paying the bribe. Te rest of us stand like a Greek chorus and smile at them the whole time.

After about 20 minutes, they decide it is better to get rid of us (what if we say something to the next tourists to enter? This could look very bad, such a large, stationary, smiling, watching group of tourists). The two Americans are given their visas. We go to the next building which, like all the others, is not air conditioned.

After about an hour and a half, we finally make it back to the bus. There have been casualties. One person had been told to go to building #4 instead of building #3. Now he was to go back and start all over. We wait in the air conditioned bus, feeling triumphant. We have succeeded.

Although I did pay the $3, for which I feel a little regret. 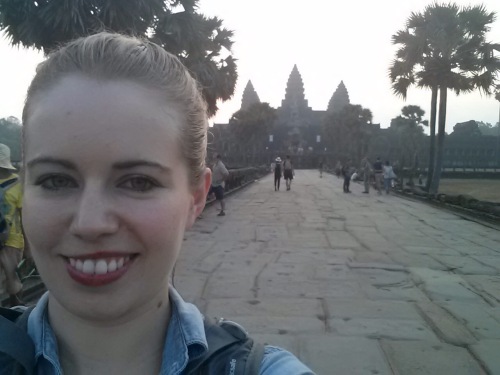