I’ve decided to publish this mostly as originally written. Many of these places were destroyed or damaged in the eatrhquake and may never exist again; I’ve written about how lucky I was to leave right before it  here.

The fabled city. City of shrines heaped up in thousands, city of jumbled time. A low city, hugging the Kathmandu Valley, fertile place of thousands’ year habitation. A brick red city, adorned with brass bells and carved wooden filigree. In the streets, great wooden screen block out the uninitiated. Low wooden doors,  locked and barred, but one – here, there – providing glimpses into “courtyards of epiphany” unimagined just a moment before. Searing hot tea for sale for ten rupees on  the corner. Tibetan prayer flags draped over the alleyway. Women in bright saris on doorsteps. City of seekers; pathway to Lhasa; on the road to  the Roof of the World; earthly palimpsest of Shangri-La and Shambhala; home of the Tantra, the Diamond Way and earthly enlightenment: Kathmandu.

Kathmandu is a difficult to city to love, like or even be curious about – at least at first. THe reason for this is the smog, which reached in and poured dust down my throat, giving me a headache within hours of arrival. Many of the streets are unpaved, and many of the paved ones are being pulled up for a long-awaited new water pipes. Burning is still a common way to to dispose of garbage. Clouds of incense billow out of every corner shrine.

I have trouble feeling wonder and curiosity when I’m doubled over hacking up a lung.

But I learned, and, eventually, armed with allergy medicine, throat lozenges, lots of water and even a cloth surgeon’s mask, I was able to tackle the city and maybe get a glimpse of the magical Kathmandu that has enchanted so many people.

Superficially, the city is very similar. The same brick houses are repeated over and over, following the same pattern: The streets are narrow and the alleys even more so. “The ground floor is a shop, storeroom or workshop. The sleeping and living quarters are in the middle and the purest and most private places, the kitchen and the puja room, are nearest to heaven.” (Kathmandu, by Thomas Bell). The puja room is the prayer room. 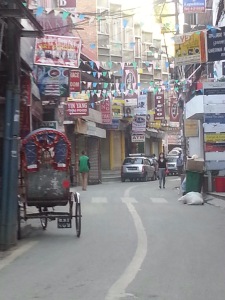 However, the city is also crowded with ancient shrines, statues and foundation stones. They blend in seamlessly, though -historical markers are rarely found – and so you have to look carefully, and wonder if what you’re looking is ancient or merely extremely old.  For example, “Nasahdya, the god of sound, is represented by an empty space; a triangular hole in the wall that opens his passage through the buildings, because he can only travel in straight lines. Every neighborhood has its guardians; its own full set of those gods (Nasahdya, Ganesh, Durga, Bhairab…) that daily life requires. Apart from the empty space of Nasahdya, these guardians are uncarved, natural stones which have never been moved from the place where the earth divulged them. They form a network of gods and goddesses, spirits and ancestors that underpins the city, its genii loci.” (Ibid) 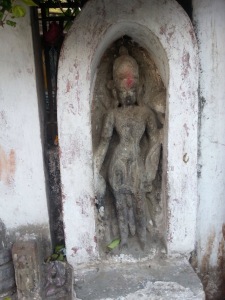 “Many courtyards have another stone somewhere, which Lukmahdya, the hidden Shiva. The old lady Dhana Laksmi told me Lujnahdya’s story in his feast day, wrinkling her nose and poking her tooth at me. Thhe god entered the city after he’d given a demon the poweer to turn people into ash and, realizing that he needed somewhere to hide, he chose the garbage of the courtyards for his camouflage. Even heaps of reeking trash were holy, if they were in the right place.” (Ibid)

Kathmandu used to be even more full of Buddhist and Hindu sculptures. But  in the 1950s and 60s thousands were stripped from thei city in order to be sold to Westerners suddenly eager for Eastern art. This website is for an art project which tries to virtually repatriate these stolen objects; there is also a database and map of the objects which appear in art museum and private collections from Japan to Scandinavia to Ohio to Los Angeles.

Most strikingly, the relics that remain are still in use, draped in flowers, scented with incense, with people praying morning, noon and night. There is no separation between old and new, historical and modern, as you would find in any Western city of a similar age. Thomas Bell explains that too:

“In Asia old objects are not generally considered beautiful for their age, which is a peculiarly Western taste. New things are preferred, so ancient wooden carvings are periodically touched up with colorful enamel paints. The fabric of the temples is layered, as they are renewed with fresh donations. When temples are rebuilt after an earthquake, which occur on average about once a century, old pieces of carved timber might be reused even as the structure is altered and worn out parts are replaced. In this way these holy building are both old and new. Rather, like other things in nature, such as a whirlpool, a forest or a coral reef, they a re constantly occurring in the same place. It is possible, up to a point, to look at the whole city as just such an eternal system.”

In the same book, Thomas Bell tries to find out if the city was designed as a mandala – a diagram of the order of the universe, with the king’s palace at the center, surrounded at the margins by the temples of the Eight Mother Goddesses, by the twelve sacred bathing places and the eight cremation grounds. However, the Buddhist priest of Varachrya caste who he approaches will give him  no answers because he is not a member of the caste. My experience of Kathmandu was like that: I was certain that so much was ungraspable to me, the uninitiated.

This entry was posted in Travel. Bookmark the permalink.